Since I am a Jewish New Yorker, it will not surprise you to know that I have Some! Opinions! About! Bagels! While most bagels are our friends, some are certainly better than others. And classics are usually best. (Ess-a-Bagel, I’m looking at you.) But at the same time, I have an apparently endless need to try out new restaurants, so I have a love-hate relationship with all the upscale bagelries sprouting up in this town. (Do we really need an $8 bagel? A Montreal-style blasphemy? Monstrously fruit flavored cream cheese? But what if it’s delicious?)

While I would not go so far as to say that we need Sadelle’s (a statement I have actually seen in print), it doesn’t hurt to have a new bagel, pastry, appetizing option in SoHo, particularly when it’s pretty darn tasty. I’d been hearing the hype about Sadelle’s for a while: it is, after all, run by the fancier-than-thou Major Food Group, with its overcrowded restaurants (I’m looking at you, tasty but claustrophobia-inducing Parm) and cocktails not priced for the likes of mortal man. ($20? Seriously? I try not to even read ZZ Clam’s menu since I’m afraid that probably costs a few bucks, though now I’ve dredged it up and, man, the pain I go through for you guys when I do research for these pieces. Perfect-sounding coffee cocktail, I hardly knew ye.) And in addition to the hype, I’d tried a pre-Sadelle’s bagel myself at last year’s San Gennaro festival, and it filled me with optimism (and calories).  So I figured it was probably gonna be good. And it was probably gonna be crowded. So I’d better hit it up right away. (This same strategy is how I managed to have a cronut once upon a long time ago.)

So the first time I went to Sadelle’s, about eight minutes after it opened for its first full day of operations, I was in a line more than ten people deep. And, bleary eyed, said yes when they asked if I wanted my bagel toasted. Well, that was a mistake. (And one excoriated by those more learned than I–look to Gothamist’s Jake Dobkin, for one recent and pretty nuanced example. In general, if you want to toast your bagel, I actually won’t shriek bloody murder, much to the despair of many of my judgmental compatriots. After all (see above), I’ve done it. Though only if asked; I don’t think I have ever requested a toasted bagel of my own volition, or even knew one existed for quite some time, since Ess-a-Bagel, holy god of bagels, would never do such a thing. Blasphemy!)

Anyway, toasting the Sadelle’s bagel was the wrong choice. Despite its ostensible freshness (the poor staff had to yell “fresh bagels!” every time a new bagel-impaled pike came out to the counter, like an upscale version of Coldstone, festooned with strangely bulbous narwhal horns), the bagel was crusty and stale-tasting. Also, I got whitefish, which set me back something like $12, and the resulting bagel sandwich was the size of a quarter. (Buying a quarter pound of whitefish and a bagel and dredging up a knife from someplace would’ve been even cheaper, relatively, than is usual for a bagel place. And it would’ve avoided the whole toasting fiasco. You live, you learn.) Plus, to make matters more pathetic, I had to wait about half an hour for it–while I got my pastries (more on that in a sec) quite quickly, my one puny bagel was trapped behind the dozen complicated sandwiches belonging to the man ahead of me (#12, his ticket said) in line. Come on, guys. Can’t we have a bagel express lane or something?

It turned out my pastries were quite good–a squishy, crusty, cheesy, berry-ey danish slice was particularly outstanding. And I picked a whole chocolate-coated babka, resplendent in its own fancy box, so my officemates were quite pleased with me that day. But the whole experience seemed like it might be overrated, when I could get a perfectly all right bagel (a perfectly better bagel?) at a lot of places.

But today I found myself up near Sadelle’s and figured I might as well stop by, if only for a quick pastry. And there was only one person in line, so I stepped in, ordered an everything 2.0 (that is a fancy Sadelle invention; don’t ask me what the 2.0 is made of) with cream cheese, plus a sticky bun, and asked the woman behind the counter which loaf cake she preferred. The chocolate chip, turned out, so I went with that. My bagel was ready promptly (maybe they heard my cries about express-lane bagelitude after all) and my bill was a suspiciously low $5. Turned out my server had given me the (very last, lonely) sticky bun for free. And the bagel was still warm (not toasty) and the sticky bun–a creation of Melissa Weller’s which I have happily had at Roberta’s many a time–was perfect, a rare occasion where the outside, crackling with caramel and sea salt, tasted even better than the tender interior.

I would’ve taken you a picture, but a fresh bagel and a sticky bun are ephemeral things. 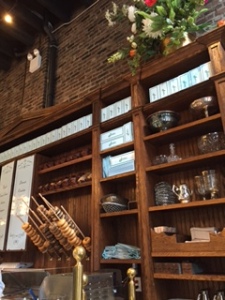 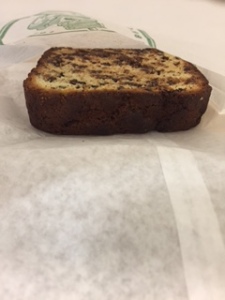